Making art on the borderline. 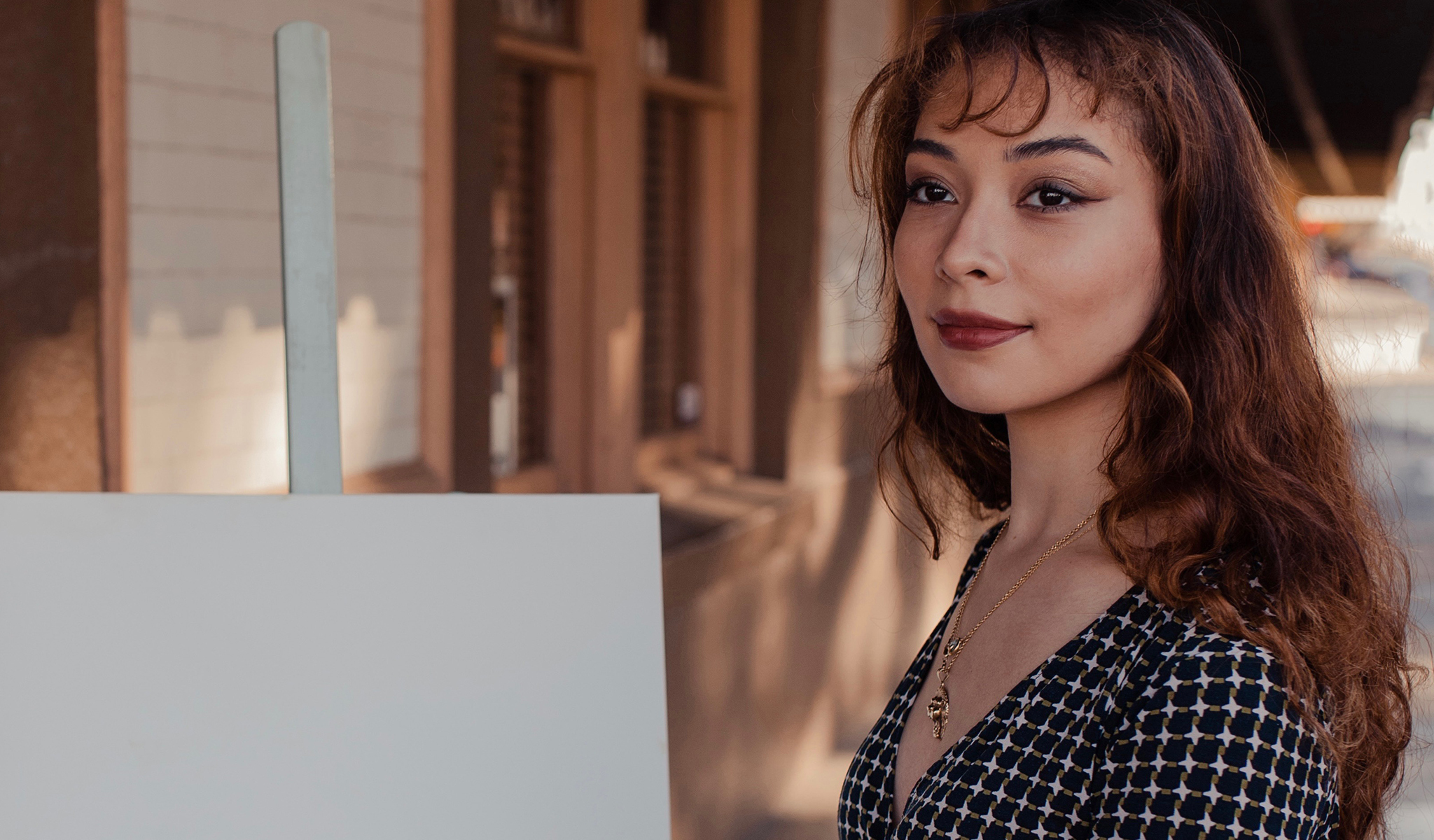 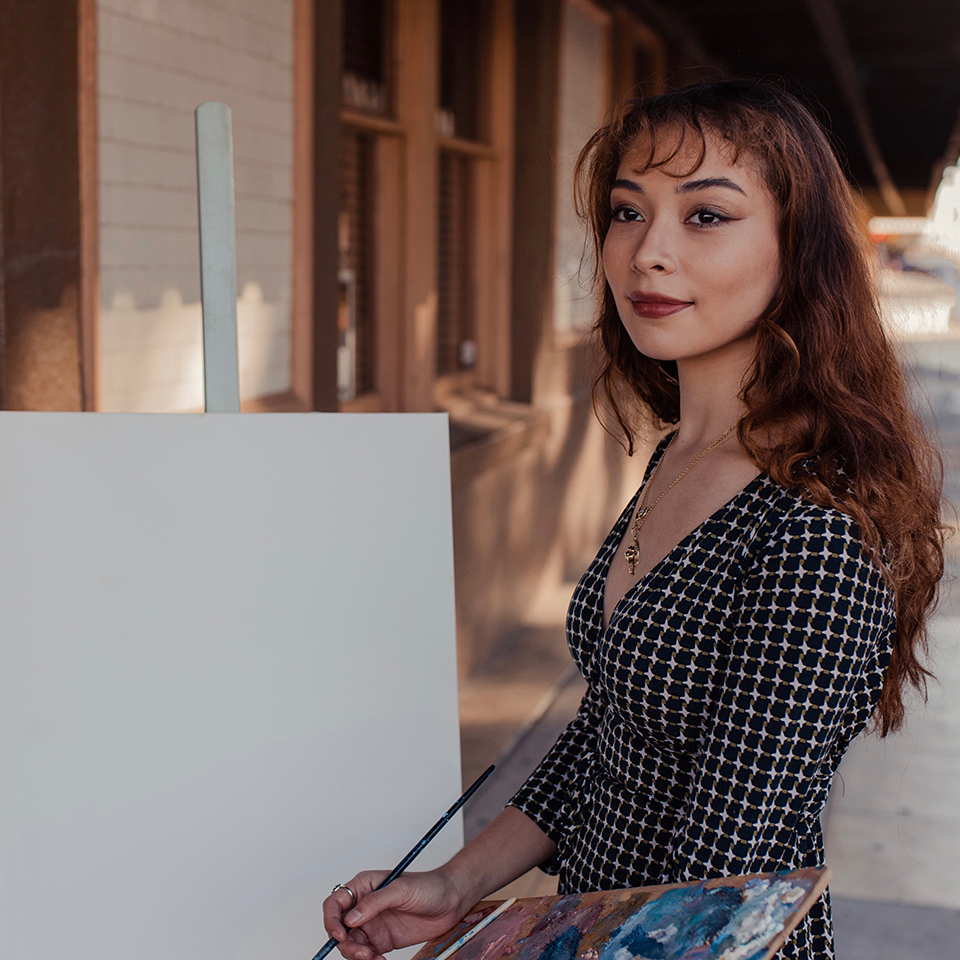 It would've been easy to understand if Leslie De Leon had cancelled this week's 10-in-10 interview -- it was scheduled in the middle of the historic winter storm which recently brought Texas to a standstill, and worse. But the painter, a junior at UT Austin, explained that her hometown of Laredo, where she's passing the pandemic, was not as badly hit as other parts of the state. She was ready and able to talk about her creative journey, even as she acknowledged the tumult and trauma swirling all around.

Perhaps that should come as no surprise, because when you learn of Leslie's life, it becomes clear she's comfortable in uncomfortable spaces. After spending her freshman year at Texas A&M International University, for instance, she felt she needed more of a challenge, so she took a year off and worked 50-hour weeks to earn the money to make her transfer possible. The way she sells her art is similarly maverick. Instead of using conventional aggregator platforms like Etsy or Society6, she created her own site so she would have total control over every aspect of her selling process and her brand.

But perhaps the best example of Leslie's desire to dwell in the unorthodox are her lush, vibrant oil paintings themselves, which often depict complex subjects, like the series she is currently working on about the Mexico-U.S. border. Other works show skeletons, masked boxers, mysterious lovers, and mystical, yet not entirely peaceful, landscapes. A strong sense of her heritage, and her love for it, infuses and informs each work.

"I paint because I truly can't see myself doing anything else for the rest of my life," she explains. "I want my paintings to make people see the borderlands and border culture in a new and refreshing way. I'm tackling the stigma of the Mexican-American border and showcasing its beauty instead." For more of Leslie’s story, read on:

How did you become a painter?

My oldest sister, when I was in elementary school, she would doodle a lot and I was always like, "Wow, that's so cool." I think that's how I really started getting into drawing. But when I tell her about that, like, "I started drawing because you would doodle," she's like, "I don't even remember that." That's so crazy to me because that's what started it all. Generally, though, I was just always drawing, filling up coloring books. My mom still has a whole chest full of little drawings that I'd make her.‍

Were there art classes along the way?‍

My first art class was in high school. I was really close with all of my art teachers, and one of them suggested that we start an art club, which I became the president of my senior year. It was very cool. It was just a place for us to be after school and do whatever we wanted. We'd draw in our sketchbooks or some people would be painting. Some people would be sculpting. I feel like you just learn the more you practice. You don't really need to be in a class to do that. But I would say I've learned the most in college -- that's where my skills have really developed.‍

Well, yes, but it's a little more complex than that. I applied to an art school in New York, and I got in, but it was crazy expensive. It was always my dream to go to New York. I had a little scholarship, but it wasn't going to be enough. I didn't want to be hundreds of thousands of dollars in debt. So I went to my local college, Texas A&M International University. I was there for a year and I was doing well academically. I just didn't feel like I was pushing myself or maturing. I decided to take a year off and work full-time as a health insurance agent. I'd never had a job before that. I applied to UT that year, and thankfully, my portfolio was strong enough that I got in. Then, when I got to UT, I felt a huge sense of competitiveness, which was really great for me, and for my productivity, because everyone is so good. It's crazy.‍

You liked the competitiveness? ‍

I liked that people cared. My parents didn't get to go to college. My mom and dad made a lot of sacrifices my entire life so that my siblings and I could go to college and have more opportunities. My dad owns a bar and grill and my mom is a stay-at-home mom who raised five kids. Being a first generation college student -- my education is so important to me. Getting a degree is so important to me.‍

Have you changed as an artist since getting to UT? ‍

Completely. When I first applied, I just had sketches and small paintings. When you're in painting classes, they really push you to be more conceptual. You have to have a story behind everything you make, otherwise, it's not art. It's just a pretty picture. I don't know if I personally agree with that idea, but I do want to show my identity through my art. I don't want it to look like anybody could have done it.

Since my classes are online now, I converted half of my bedroom into my studio. Recently I've been taking my own pictures, and then from there I work on what I want the painting to look like. The series I'm working on right now is about Laredo, where I was born and raised.‍

Most people know Laredo for being a border town --‍

It's a border town, but it's one of the safest cities in the country. People have this misconception about the border -- that it's this war zone and it's super dangerous and there's a huge ugly wall. But really, it's just a border river, just a river, and it's really beautiful. What I'm doing now is painting the river in this really beautiful light. I've been going down there a lot. It's in a park, actually, you can be on one side and wave to the people on the other.

It all started when I moved to Austin and I told someone that I was from Laredo and they looked at me like, "Oh my God, are you okay?" I was really surprised because it's the safest place in the world to me. I felt more safe in Laredo than I felt in Austin, frankly. I want to, I guess, reclaim the border, because for the past four years in particular, people have had this fear about something they're not familiar with. It's a really complex situation. I don't want to always make it seem like sunshine and rainbows, but I do want to portray it truthfully.‍

You have a music highlight on your Instagram. What's the connection?‍

I love listening to music while I paint. Sometimes I watch old shows, but I lean towards music, because I'm not distracted by it. Right now I listen to a lot of Mac Miller. I have been for the past three years, since he passed away.‍

Let's talk about the business side of your creativity. Why do you have your own online store, instead of one of the usual platforms? How do you find buyers?‍

I started with my site kind of early. My dad urged me to create one so that I could start now as opposed to starting after I graduate -- so that I have a head start. It's really dependent on my social media, honestly. I have to work a lot on Instagram, Twitter, TikTok even, I'm attempting, but I'm really bad at it. I just have to work to get people to see my stuff, which is not the case if you're going through Etsy. Etsy kind of does that for you, but I want it to be my business. I want it to be my name, my brand, so I do it all myself. I really rely on my friends and my small following. They share my stuff most of the time. That's what really makes a difference.‍

Is your plan at this point to build your business that way?‍

I have a bunch of plans. I'm hoping to study abroad this summer if travel becomes possible. Hopefully, I get to go to France, which is a huge historical art spot for me. I'm in a landscape art history class, and some of my favorite artists came out of France. I also really want to have a solo art show, again, once the world reopens. I could do it virtually, but I just want to connect to people in person. Art is a completely different experience when you see it in person. I want to continue my border culture series in different landscapes and different states. And eventually, I want to get my master's degree and become an art professor. ‍

And in the near term?

‍The most important thing for me right now is just getting back to school. I didn't get to spend that much time in person with my professors. I really want to do it the right way, as opposed to just doing it all through Zoom. I think it all goes back to my parents. Like I said before, they didn't get to go to college, so for me it's really important that I get to go -- for them and for myself.